In this week’s “Economist”——— Roundabouts, one of Britain’s great exports

This week is turning out to a week about roundabouts. Not only was the Roundabout of the Year announced by the Roundabout Appreciation Society [the dullight posted just before this one], we’re delighted to see roundabouts in this week’s Economist — not just one but two engrossing articles about them.

The news basically is that roundabouts have turned a corner and are circling the globe. They’re a great British export but there are risks.

Where do roundabouts fit in? They’re in a middle category, along with atomic theory and bagpipes: inventions capable of doing good but only if in the right hands. (Marmite should be added to this list?)

How to use correctly? Basically it’s yielding and entering correctly: yield to cars already in roundabout and be in correct lane for where you want to go: 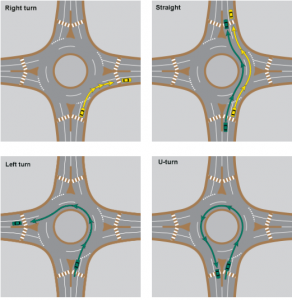 And certainly don’t do like it’s been reported happens in Bagdhad: drivers go around in both directions.

•  They also are popular in the Netherlands, Australia, Hong Kong, and Israel.

•  They are very common in Jordan. In Amman there are so many, and they are numbered, that people refer to them in their addresses.

•  Roundabouts save fuel compared to stop lights where cars need to accelerate again when the lights turn green.

Like all good articles about roundabouts, the article mentions the Magic Roundabout in Swindon: Five mini roundabouts around a giant roundabout. A wonder to behold indeed.

The Roundabout Appreciation Society, one of our favorite appreciation societies,  is mentioned. Placemats picturing Swindon’s the Magic Roundabout are available in the society’s gift shop; click on this to get to the shop: 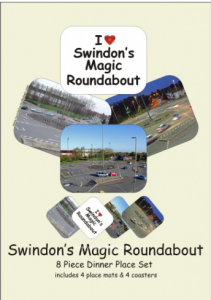 Here are the URLs to the articles in The Economist:

•  “Road Safety: Circling the globe, roundabouts have turned a corner“ 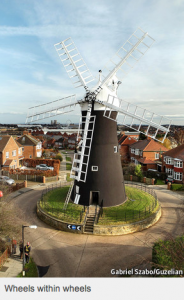 A final point: coming back to the inventions exported from Britain that have shaped the modern world: what about the English language—would world commerce be able to function if no one spoke English?