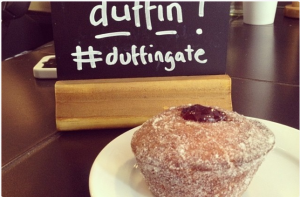 A raging controversy in London has caught our attention. It’s about duffins, a fusion of doughnuts and muffins.

As doughnuts and muffins are rather ordinary, duffins must be ordinary too. So how can there be anything controversial over them? 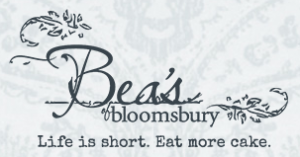 Duffins originated at Bea’s of Bloomsbury, a bakery at 83 Watling Street in London. Owner/baker Bea Vo, in 2008, began baking a doughnut-muffin. Customers christened it a “duffin.”

In addition to Bloomsbury, Bea’s has stores at St. Paul’s, Maltby, and Farringdon.

Duffins have been selling like hot cakes at all of the Bea’s. 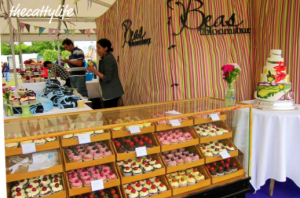 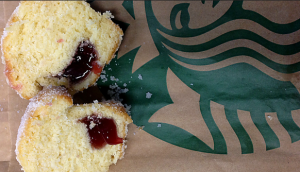 Recently Starbucks jumped on the bandwagon. It began selling it’s own duffins.

What has Bea’s and its customers agitated is that Starbuck’s supplier, Rich Products (also a giant multinational corporation), has trademarked the name “duffin.” 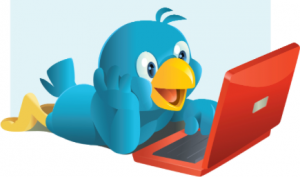 Tweets have been flying about this. 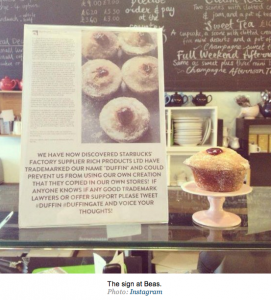 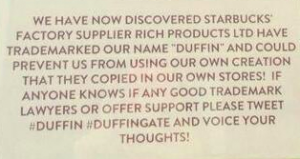 As a result of protests, Starbucks and Rich Products now say they will not try to stop Bea’s from selling duffins.

Discount at Bea’s — password “original.” To thank loyal customers for support on social media. Bea’s is giving 15% off on its duffins. The discount applies to both in-store and online purchases. To get the discount online, simply enter the password, which is “original.” Clever indeed. 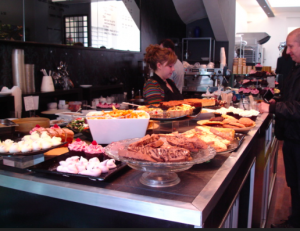 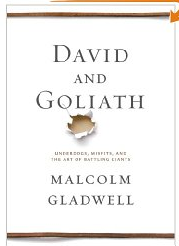 One of our members, Paige Turner, has just finished reading Gladwell’s new book, David and Goliath. He thinks the story emerging from Duffingate — ordinary tea shop against giant multinational — should be in the sequel, David and Goliath II.

Many of us dull men are connoisseurs of doughnuts and muffins and now of duffins.

•  Doughnuts:  We’ve always liked donuts. It’s not only that they taste good, they bring roundabouts to mind. We like roundabouts and follow developments about them carefully, especially recent news about Columbus Circle in New York and the Duck Pond Roundabout in Kent winning awards in connection with the Roundabouts of the World Calendar 2014.

•  Muffins: We like muffins. It’s not only that they taste good. We like the sound of that word, it sounds like muffle. a pleasant-sounding word. And, according to dictionaries, the list of synonyms for muffle not only includes “tone down” and “dampen,” “dull” is also included on the list.

•  Duffins: What a wonderful idea.

•  And all three are dunkable.

Other hybrids have been cooked up in recent years:

How about popcorn and gravy — if a restaurant were brave enough to offer it, what should it be called?

•  The Guardian: “How the duffin, a muffin-doughnut hybridk is provoking cake rage“

•  NBC News: “Starbucks in a jam over duffingate“