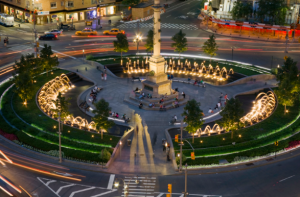 Congratulations to Columbus Circle — it’s been designated as the World’s Best Roundabout by the Roundabout Appreciation Society.

This was announced in connection with the launch of the society’s Roundabouts of the World Calendar for 2014.

Columbus Circle is generally regarded as  the world’s first roundabout. Kevin Beresford, the society’s founder and president (nicknamed Lord of the Rings), says “I’m a huge fan of Columbus circle — New Yorkers  should be proud of their innovation.”

“When it comes to traffic circles, the first is still number one” is how Fox News describes it in their article “Columbus Circle named World’s Best Roundabout.”