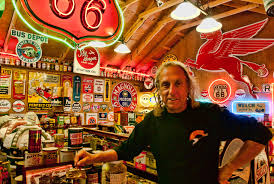 Johnnie Meier has been fascinated with cars and motoring his entire life. What particularly fascinates him is the “road culture” — gas pumps and signage along roads everywhere as well as neon signs, oil cans, maps, soda coolers and signs, and license plates.

He found a spot in Embudo, New Mexico for the museum. It’s on highway 68 that goes from Santa Fe to Taos — the “River Road to Taos” that follows the Rio Grand. He designed it to be a 1940s gas station.

In 2002 he retired from his job as a scientist at the Los Alamos National Laboratory. He had more time to develop the museum.

The museum not only allows Johnnie to display road culture memorabilia, it’s also his workshop.

“I always enjoy finding a new item to restore,” Johnnie said. “I enjoy the restoration process — disassembling, sandblasting, banging out dents, filling holes, finding missing parts, and painting. When I’m restoring something, I don’t want it to end.”

“My motto when restoring is ‘In Rust We Trust.’ Rust is good: it means the item being restored is real, is not plastic.”

The pumps come from a variety of sources. Farms are a leading source. Gas stations upgrading their pumps gave old pumps to farmers. When the farmers eventually replaced these pumps with more modern versions, they give them to Johnnie, often along with other things they no longer needed.

Many of the gas pumps and other artifacts are outside of the museum building. “From time to time I notice that items are missing. But I also find new items that have been secretly dropped off, donations to the museum. The way I figure it, it balances out.”

Johnnie is also restoring an old diner from the 1950s. It’s a diner made by the Valentine Manufacturing Inc. in Wichita. He found it in a junkyard near Santa Fe. When restored, it will be to be an ice cream parlor. It’s name will be “Eat Mo’ Ice Cream.”

Art directors from films, fashion shoots, and commercials visit the museum for props. They look through the museum’s historic photos of gas stations. They select a year. Johnnie supplies props that fit the year. Items from the museum have been used in ten Hollywood films, including No Country for Old Men and Wild Hogs.

Another group who use materials from the museum are artists who create “found object art.”

“It’s amazing how many people have a sentimental attachment to a gas station from their past,” Johnnie says. “I love hearing visitors’ comments about memories evoked by what they see.” 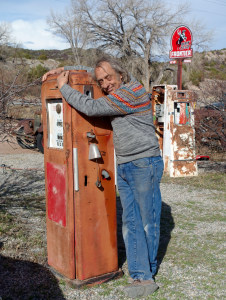 The gas pumps out in front of the museum draw in the visitors. Then, when the visitors come inside the building, there’s the “wow” factor when they see the explosion of color from neon signs and globes that used to sit on tops of gas pumps. Johnnie says, “The ‘wows’ are my reward. I know then that I’ve done things right, makes it all worthwhile.” 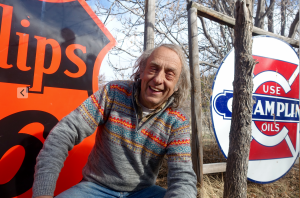 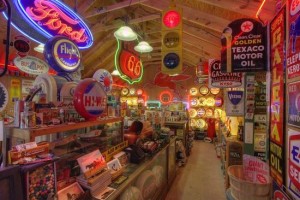 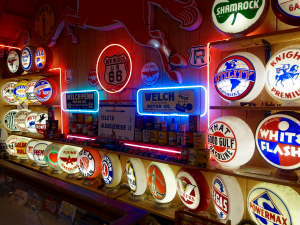 Another “Explosion of Color” 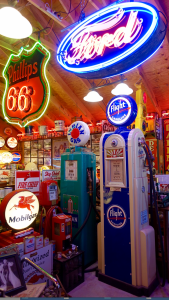 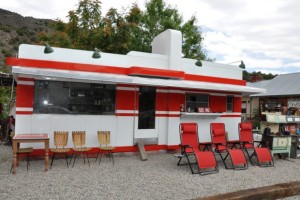 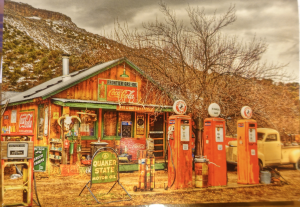 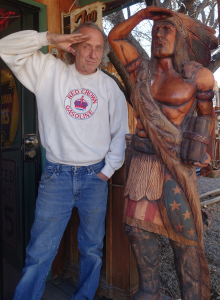