No one was more surprised when Lee Maxwell became obsessed with washing machines than his wife Barbara. “Up until then he had been near enough to a washing machine to do laundry only once,” she said. “It was a disaster. All the whites came out pink.”

After retiring as a professor of electrical engineer at Colorado State University, Lee and Barbara bought a motor home and headed east to Maine to vacation and eat lobster. On the way, when in Iowa, they came across a farm auction. That’s where Lee bought his first antique washing machine, a Maytag.

They put the 200 pound machine on the roof of the motor home. By the time they got to Maine, three more machines had been added to the roof. Barbara feared the roof would cave in so they bought a trailer. 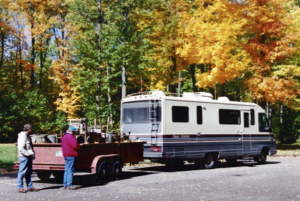 Before they had returned to Colorado, the trailer filled up so they had to buy a larger trailer. 30 washing machines ended up in Colorado.

What began as a whim had turned into an obsession. Lee was hooked. “It suited me just fine.” he said. “I needed a hobby. I didn’t hunt. I didn’t fish. I didn’t think I should try bungee jumping. I’m glad washing machines came along.”

In 2000 he was awarded the Guinness World Record for the largest collection of antique washing machines.

He has 1,100 on display in the museum — 12,000 square feet of space in two large buildings next to the Maxwell’s home, which is out in the country near Eaton, Colorado.

What is even more amazing is that all of them work. But this is only after Lee painstakingly disassembles them, cleans all the parts, reassembles them.

He also has 400 additional machines — unrestored — Lee refers to these as “ladies-in-waiting.”

The machines are arranged in the museum by epochs: 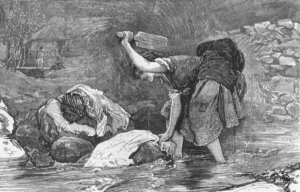 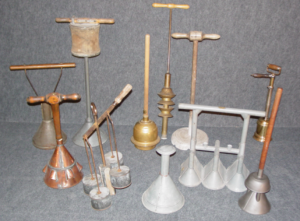 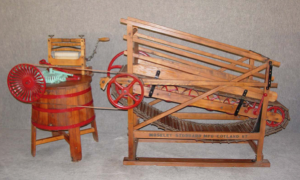 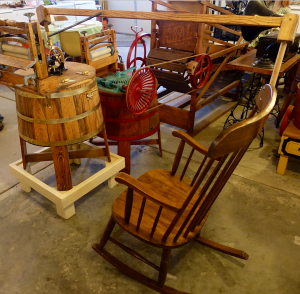 •  Motorized Mechanical — 1903-1937 — motors, mostly electric motors, were added to a vast array of machines designed to agitate the laundry but were still operated by hand: 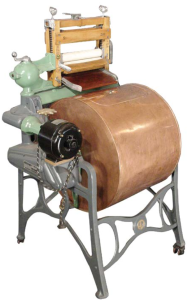 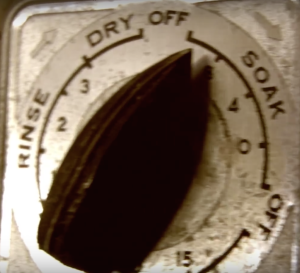 “All aspects of this — hunting, restoring, demonstrating — has been fun,” Lee says. “The most fun is ‘The Hunt.’ We’ve traveled throughout America as well as the UK and Australia. We’ve not only found the machines, we’ve met some very grand people.”