Rally to Restore Sanity — a March on Washington 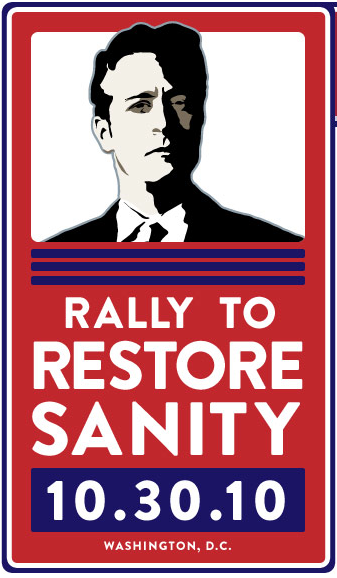 Breaking News: Oprah is on board . . . click here to view her tweet about it, she says “I think Jon Stewart’s on to something. Rally to Restore Sanity. Would you consider going? Oct 30, 2010?”

This rally is right up our alley. We Dull Men do not normally participate in protest marches. Most of these marches are by extreme groups, not by groups of orindary people like us. But a Rally to Restore Sanity, a march of moderates? What a great idea.

Jon Stewart announced on his Daily Show that the show has secured the National a Mall in Washington for a “Rally to Restore Sanity.” It will ge held October 30. He said it will be a Million Moderates Marching on Washington.”

It’ll be an alternative to noises from the minority of 14 to 20 percent of Americans on the left and on the right that flood air waves with extreme rhetoric, the left shouting out that former President George W. Bush should be tried as a war criminal and the right accusing President Obama of being a socialist and un-American.

It will be “two or three hours on a Saturday for some nice people to get together for some fun,” said Stewart.