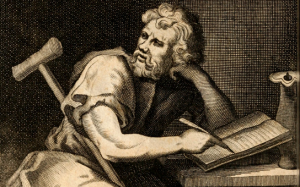 We dull men are sometimes described as stoic — we typically are quiet, don’t complain much, don’t wear our feelings out there on our sleeves.

“Keeping a stiff upper lip,” as the British say.

After reading an article “The Stoic: 9 Principles to Help You Keep Calm in Chaos” [in 99U: Insights on making ideas happen by Behance] we realize that, if in fact we are stoic, we are in good company, have admirable character traits.

The nine principles in the article were espoused by Marcus Aurelius, Seneca, and Epictetus. They are tools applicable to our current endeavors, unlike other abstract schools of philosophy filled with abstract thinking and debate.

Stoics focus on two things: how can we lead fulfilling, happy lives?; how can we become better human beings? How about less comparing, criticizing, and consuming; more creating, learning, and living.

Doesn’t contentment — something dull men like — come from practicing self-control, being aware of impulses, realizing the fleeting time we have, not running from obstacles but instead using them to fire us up? 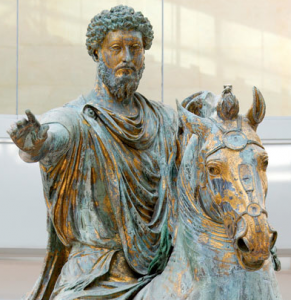 1.  Our feelings come from us, not from something or someone outside of us

“Today I escaped anxiety. Or no, I discarded it, because it was within me, in my own perceptions — not outside.”  Marcus Aurelius

“Choose someone whose way of life as well as words, and whose very face as mirroring the character that lies behind it, have won your approval. Be always pointing him out to yourself as your model.”  Seneca 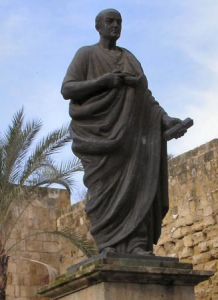 “When something threatens to cause you pain: the thing itself was no misfortune at all; to endure it and prevail is great good fortune.”  Marcus Aurelius

4.  Book Learning — put it into practice

“Don’t just say you have read books. Show that through them you have learned to think better, to be a more discriminating and reflective person. Books are the training weights of the mind.” Epictetus

A person who is not aware that he is doing anything wrong has no desire to be put right. You have rot catch yourself doing it before you can reform. Seneca.

6.  No waisting time on small things

You’re better off not giving the small things more time than they deserve. Marcus Aurelius

7.  You weren’t meant to procrastinate

Don’t you see the plants, the birds, the ants, spiders,  and bees going about their individual tasks, putting the world in order as best they can? And you’re not willing to do your job as a human being? Why aren’t you running to do what your nature demands? Marcus Aurelius

Nothing, to my way of thinking, is a better proof of a well-ordered ming than a man’s ability to stop just where he is and pass some time in his own company. Seneca

9.  Time — our most precious resource

Not to live as if you had endless years ahead of you. Death overshadows you. While you’re alive and able — be good. Marcus Aurelius

Epictetus sums it up nicely: philosophy should be a way of life, not just a theoretical discipline. All external events are determined by fate and are thus beyond our control. We should accept whatever happens calmly and dispassionately. We are responsible for our own actions. We can examine and control our actions with self-discipline.