The World Snail Racing Championships are held each year at Congham, near King’s Lynn in Norfolk. This has been going for more than 25 years. 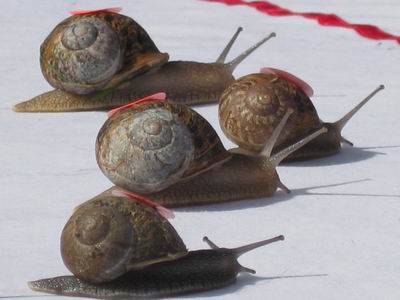 Congham is to snail racing what Silverstone is to Formula 1 racing and Newmarket is to horse racing. The championships were started in the 1960s by Tom Elwes.

Congham is particularly suited for these world championships. Snails like damp conditions. Conham, sitting in a low-lying area surrounded by ponds, is damp.

A new world record was set on July 15, 2006. Archie, a snail owned by six year-old Emma Hartley of Castle Acres, covered the 13 inch racecourse in two minutes and 20 seconds.

Like Archie, many snail racers are children. Children make better snail trainers than adults. Children make pets of their snails; they let them crawl all over their arms, legs, and faces. Children take snail racing seriously – when nine year-old Thom Vincent won the championship s a few years ago he said, “I have achieved my lifetime’s ambition.”

BBC, in an article “Ready, Steady, Escargot,” covered the first professional snail race in London. The race took place at the O’Conner Pub in December 1999.

Ten snails competed. After starting off when they heard, “ready, steady, slow,” they raced antenna to antenna to the finish line.

John McCririck, race commentor, said, “It’s always difficult to study the form with snails because they hide inside their shells – but it’s actually much easier to comment on the race because it’s slower than horse racing.”.

Slugs, like snails, are gastropods, The only difference appears to be that slugs lost their shells.

Slugs are as much fun to race as snails. Click here for a website, Slug Racing Online, for an excellent presentation of the ins and outs of slug racing, including a great picture of a racetrack: 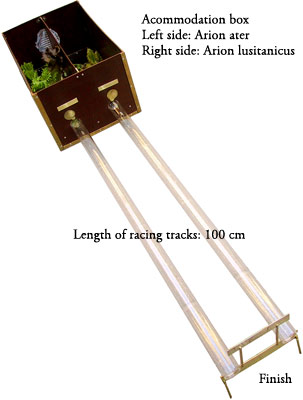 This website has a fascinating list speeds of snails and slugs. There’s the observation,“ A large banana slug has been observed to cover 6.5 inches in 120 minutes. At that rate, a tortoise would seem fleet-footed.”

Do you want to know about the world’s largest snail . . . how to know whether a snail is male or female . . . how snails court? If so, then this is the website for you.