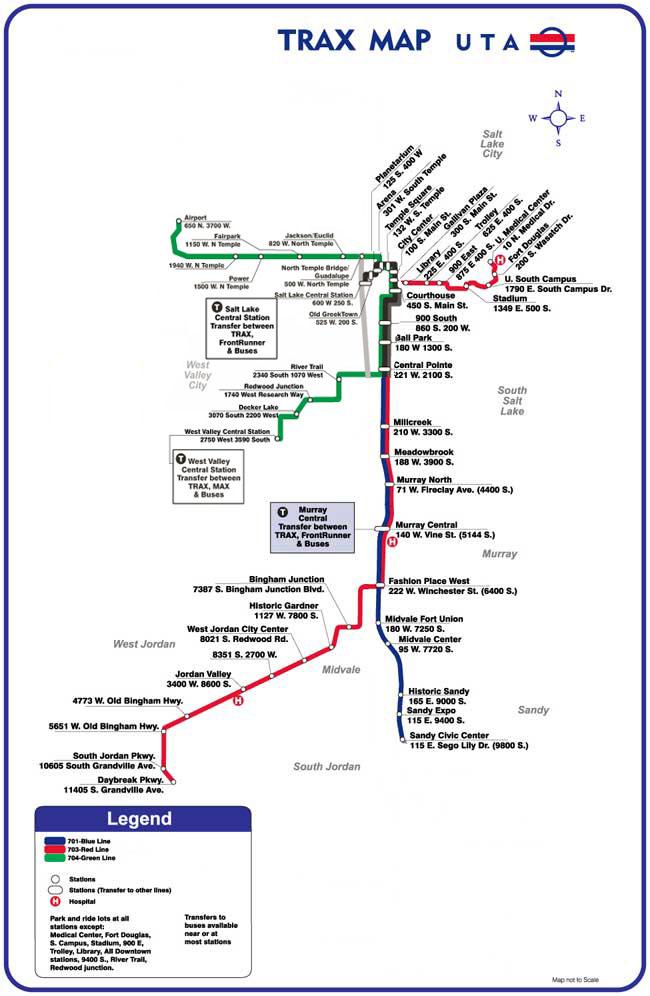 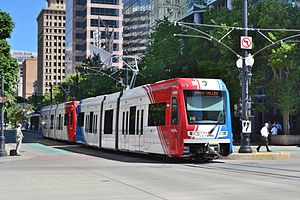 David Ballard, Reston Virginia, had an exiting time in Salt Lake City. He toured the city using its light rail network. We are pleased he sent us a trip report.

David included seven fascinating photos in his report. Our favorite is a dun-colored wall. There are mountains behind the wall; excitement of this is diminished as the wall hides most of the view of the mountains. There’s also a stunning photo of an upholstered seat on one of the trains.

I was absent from the DMC’s event in London on 2 November [launch party for DMC’s 2017 calendar], but was with the Club in spirit. In body, inspired by our association’s values, I spent the day exploring TRAX, the Salt Lake City, Utah (USA) light rail system. I will not burden you with too much information about TRAX, but you can satisfy your curiosity about facts and figures at this excellent website run by the Utah Transit Authority (UTA), http://rideuta.com/ TRAX, for those who wondered, is short for Transit Express, but only a very small percentage of riders would be aware of the full name of their conveyance.

I rode three of the five TRAX lines just to see where they went, and managed to take a few photos that I trust conform to Club standards of marginalia. It will likely not prove a surprise to any of my readers that I made this pilgrimage alone. The quiet enthusiasm I harbor for pursuits like this is rarely shared by those close to me, though I am pleased to report that some at least submitted politely to glancing at a few photos and enduring a very brief recounting of my adventure when I returned.

To start, here is an example of a downtown platform. The second-tallest building in Salt Lake City (the tallest is less than a meter higher) and the Mormon Temple dominate the center of the photo in the vicinity of the traffic light. 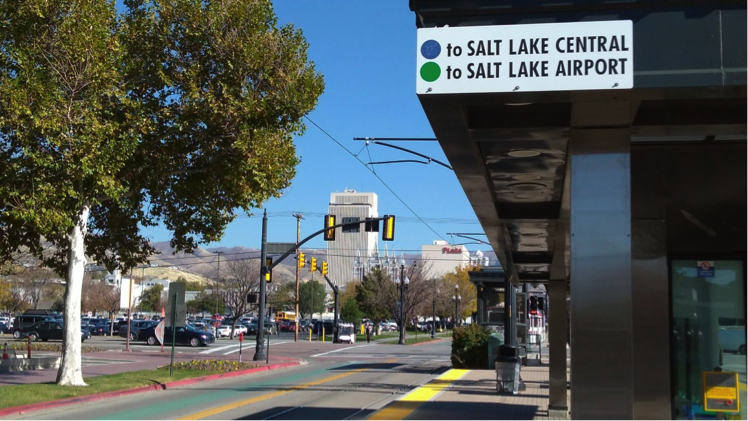 The interior of each TRAX car invariably presents as clean, spare, and functional. Speaking personally, I was rather taken by the absence of adornment or glitz. In this photo of a typical seat, you will see a modest pattern of “UTA” incorporated into the muted red and blue upholstery [we are pleased to hear the colors were muted]. This combination represents the most daring design element of TRAX’ interior decor. 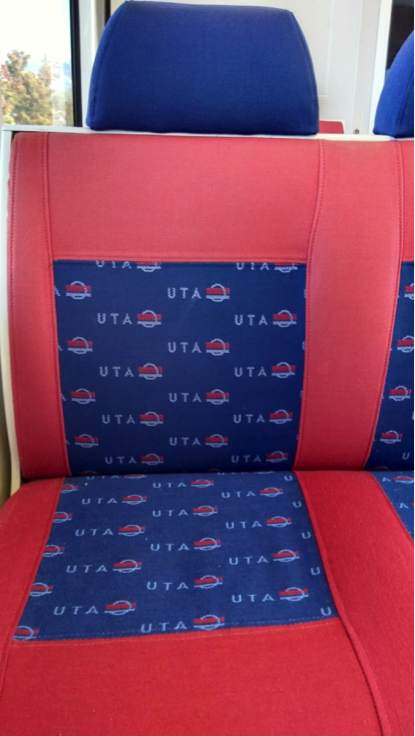 Suburban stations are quite correctly accessorized by walls, which serve as noise barriers to protect citizens’ sensitive ears. Likewise, jaywalkers and others who might attempt to access the platforms via unauthorized routes find themselves deterred and detoured by the wall. This photo illustrates splendid use of that unprepossessing color that is gray in some light and tan in some light. Dun is perhaps the correct word. 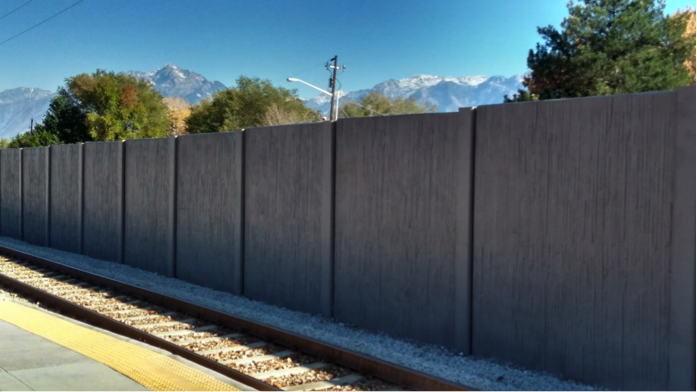 Stations in urban areas are more open to passers-by. Who knows; they might choose momentary spontaneity and hop on a car for the thrill of it. In fact, TRAX charges no fare for transit in the core of downtown Salt Lake City, with helpful announcements reminding passengers that after the next stop they are expected to be in possession of a valid ticket. 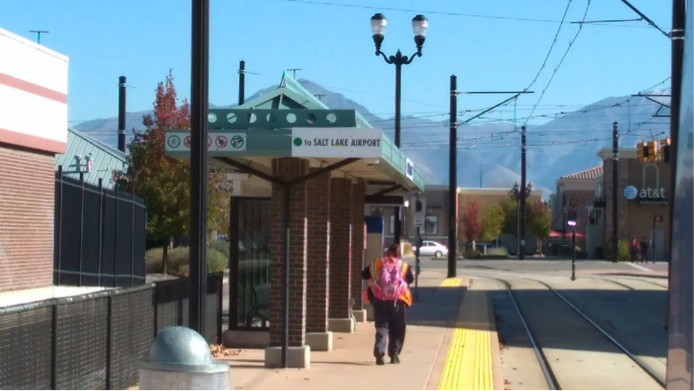 Art is where you find it, perhaps in a still life image that invites contemplation of the role of safety nubs and bright yellow in alerting potentially hasty or inattentive travelers to the risk of accidental propulsion onto the tracks. 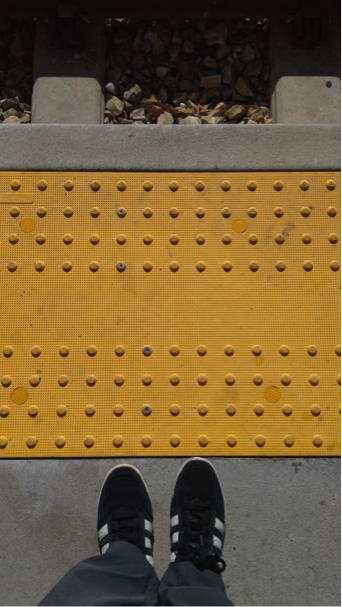 [Typical of a dull man: he’s looking down at his shoes]

The TRAX system pays appropriate homage to its more ambitious and influential predecessor. This station offers a view of and access to the historic Union Pacific station railhead, now a shopping center. 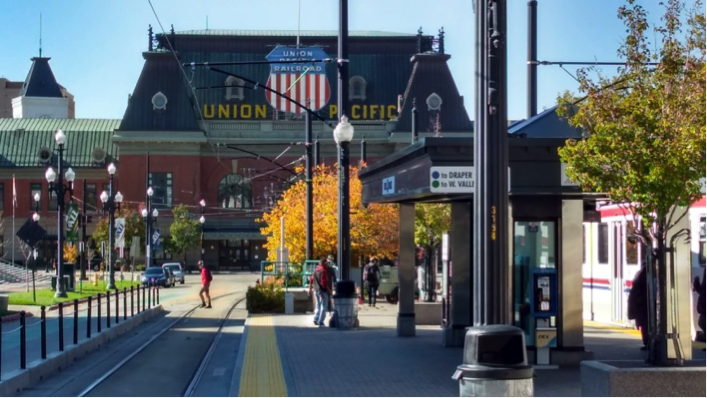 At the end of a day’s trek on TRAX, a passenger alights at and enters a different kind of temple, yet one with the landmark Mormon Temple in the background. 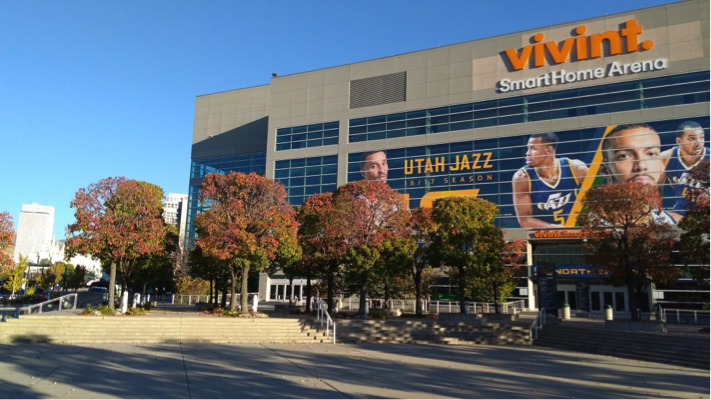 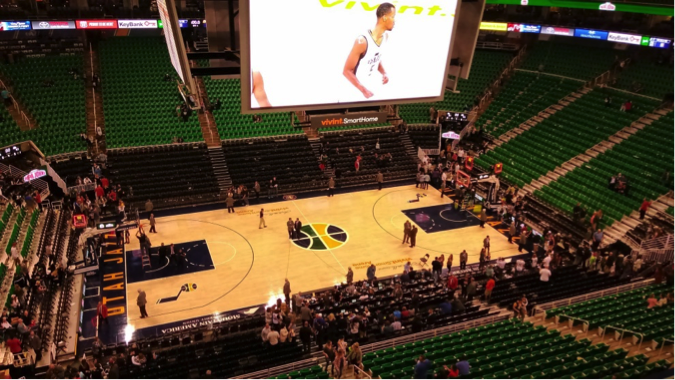 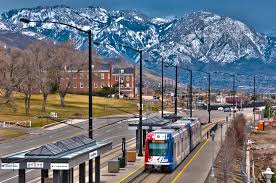