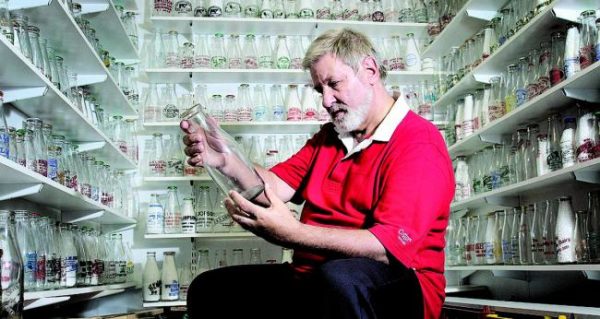 I’m fascinated by men and women with quirky passions. They are passionate about things you probably think are mundane, dull, boring.

Steve Wheeler in Malvern in Worcestershire has one of the world’s largest milk bottle museums. “They are so nice to hold. I just love the tactile feel of them,” Steve says cuddling a bottle.

Jacky Smith from Highcliffe in Dorset collects and gives lectures about barbed wire. “People ask me how can talk for whole hour about barbed wire. That’s not my problem. My problem is how can I limit it to one hour.” This is the case even thoughJacky has no fence.

Jacky is different from Steve in one aspect: she doesn’t cuddle her barbed wire.

“My wife was not happy with my roundabouting so she left me,” says Kevin Beresford from Redditch near Birmingham, president of the Roundabout Appreciation Society. But there’s a silver lining for Kevin. “That is OK. Now I can go out to photograph roundabouts anytime I want.”

Even though what they do might appear to be silly, I think they are on to something. I believe they are practicing ikigai, a concept in Japan for having a reason for being. Ikigai is said to be the reason for the longevity of the Japanese. It’s what holocaust survivor Viktor Frankl (1905-1997) in his book Man’s Search for Meaning called the thing that gives meaning to your life. It’s what Archie Workman, a “drainspotter who finds and restores drains along country roads in Cumbria, calls “my reason to jump out of bed in the morning.”

“A calm and modest life brings more happiness than the pursuit of success combined with constant restlessness,” said Einstein. (This quote was concealed for 95 years. In 1922, when Einstein was in Japan on a speaking tour in Japan, a bellboy delivered a package to his room. He wrote this on hotel stationery, handed it to the bellboy, and said the value of it someday will be more than a tip. He was right. it sold for $1.6 million at an auction in 2017.)

Steve, Jacky, Kevin, and Archie with their love of milk bottles, barbed wire, roundabouts, and drains are following Einstein’s advice. They are not striving for glitz and glam. They are not always moving on to the next big thing.

Peter Drucker (1909-2005) said, “There’s been an unprecedented change in the human condition. For the first time in history, a substantial and rapidly growing number of people have choices. For the first time, they will have to manage themselves. They are unprepared for this.” Drucker was a management consultant and educator, regarded as the founder of modern management.

In addition to the wide array of choices, there are constant pressures to achieve and acquire more (“moreitis”?). People are busier than ever, are constantly glued to digital phones, and coping with other twenty-first century ills.

I’ve met over 80 men and women with quirky passions. I have interviewed and photographed them for social media, calendars, and a book Dull Men of Great Britain: Celebrating the Ordinary. As I was doing this, I began to notice they are exceptions to Drucker’s prediction. They are managing just fine. They seem to have the right tools for dealing with the twenty-first century.

Indulging in their passions gives peace of mind in turbulent times. Chris Coles, “The Puzzle Man” from Babbacombe in Dorset, has completed over 7,000 jigsaw puzzles over the past 20 years. He does it now for a charity shop that wants to make certain puzzles donated to the shop are not missing pieces. “I just love it. It’s so therapeutic and it teaches you to be patient. You can really lose yourself in it. I’ve been doing it for so long I’ve completed the same puzzle design as many as ten times.” Chris is enjoying “flow,” a concept recognized and named in 1975 by psychologist Mihaly Csikiszentmihaly. Athletes call it “in the zone.” It’s complete absorption and loss of sense of space and time.

Others with quirky passions I’ve interviewed agree. “When I’m out photographing roundabouts, I’m not worrying about my bills,” says Kevin Beresford.

James Brown, who’s from Derbyshire and holds the Guinness World Record for his collection of vacuum cleaners, says, “I feel my passion for vacuum cleaners is just like the passion my mates I hang out with at our local have for their favorite football teams.”

“The fun is in the doing,” says Dick Fryer, who lives in Somerset and restores vintage military vehicles. It’s being fully immersed in and enjoying the process.

Does the joy from these passions ever end? Not for Stan Hardwick who lives in Filey, North Yorkshire with his collection of over 300 lawnmowers. Stan says. “I still get a thrill when I find another lawnmower to add to my collection. I’m lucky in that my wife puts up with my collection. She even lets me keep two in our drawing room.”

Celebs too prefer to avoid glitz and glam

The people I’ve been writing about so far, ordinary people, are not alone. Celebrities join in as well.

Joan Baez was showing a CBS Sunday Morning reporter around her home in California, a rather modest home. The reporter asked whether she was ever tempted to get something bigger or grander. She replied, “No. I’m not interested in bigger and grander.”

Rod Stewart is now an avid model railroader. In the old days of wild partying, hotels dreaded his arrival. Now he’s welcomed with open arms. An extra room, free of charge, with a big table for his modeling is set up. Holiday Inns lifted a four-decade ban in 2015.

He said when he appeared on the cover of Model Railroader magazine, “I pity a man who doesn’t have a hobby like this. It’s just the most supreme relaxation. Every person should have one hobby that really captures their interest.”

Alan Shearer, one of England’s best-ever footballers, when asked by a reporter after his team won the nation’s premier championship what he’d be doing to celebrate, said “I’m going home to finish creosoting the fence.”

Socrates led a frugal life. He dressed in a simple robe, no shoes. When seen once walking out of a grand bazaar, someone surprised to see him there commented how out of character. “I do it to discover how many things I am perfectly happy without,” Socrates said.

Aristotle had his golden mean, a moderate, balanced, and reasonable way of life, avoiding excesses. This is much like lagom in Sweden: just the right amount, not too much, not too little.

Seneca (4 BC – AD 65, Stoic philosopher, statesman, and satirist) wrote, “Today we saw the mail boats from Alexandria come into view all of a sudden. While everyone was hurrying from all directions to the waterfront, I found a great deal of pleasure in refusing to bestir myself. Although there would be letters to me, I was in no hurry to know what reports they might be carrying or what might be the state of my financial interests there.”

In the end, should we look at people with quirky passions and laugh? I think not. It’s better that we recognize their wisdom. By breaking away from the herd, they have found enjoyable ways to live calm, rewarding, and happy lives. Socrates said, “The secret of happiness, you see, is not found in seeking more, but in developing the capacity to enjoy less”