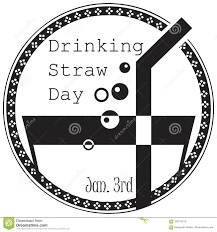 January 3, 1888 Marvin Chester Stone was awarded patent #US375962 by the U.S. Patent office for a paper drinking straw he invented.

Definition of a Drinking Straw

“The drinking straw is a short tube used for transferring a liquid – usually a drink from one location to another (such as from a cup, to one’s mouth).”  “A thin tube of plastic (such as polypropylene and polystyrene) or other material, straight or with an accordion-like living hinge, it is employed by being held with one end in the mouth and another end in the drink.” “Muscular action reduces air pressure in the mouth, whereupon atmospheric pressure forces the drink up the straw.” “The first straws were made by the Sumerians, and used for drinking beer (as to avoid the solid byproducts of fermentation).” “Argentines and their neighbors use a similar metallic device called bombilla that acts as both a straw and sieve for drinking mate tea. The modern drinking straw was patented in 1888 by Marvin C. Stone.”

When is this holiday celebrated?

Drinking Straw Day is celebrated annually on January 3 in the United States!

On drinking straw day we are encouraged to celebrate the invention of the drinking straw. So enjoy this day by drinking cool drinks with cool straws all day long!

Origin of this Holiday

Our research did not find the creator, or the origin of this day.

Why January and Why the 3rd day?

We did find reference to the background and the date-

It seems the first modern drinking straw was invented on January 3, 1888 so that’s where the date came from.

This holiday is referred to as a “National” day- However, we did not find any congressional records or presidential proclamations for this day. Even though we didn’t, this is still a holiday that is publicized to celebrate. So enjoy the day and have fun with it.

Wikipedia encyclopedia tells us “Marvin Chester Stone was the inventor of the modern drinking straw.” “He lived in Washington DC most of his life, until his death in 1898.”

“The first drinking straws were made of dry, hollow, rye grass.” “Stone, who worked in a factory that made paper cigarette holders, did not like this design because it made beverages taste like grass.” “As an alternative, on January 3, 1888, he got a piece of paper from his factory.” “He wrapped it around a pencil.” “He coated it with wax so it would not leak or get waterlogged.”

We are not sure what the point of the day is, who’s behind it, etc. We’re not alone in our bewildement: www.gone-ta-pott.com/drinking_straw_day.html