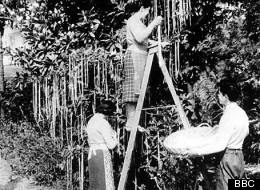 This was when Italian dishes were not widely available in the U.K. Not all Brits knew spaghetti is a pasta made from wheat flour and water. 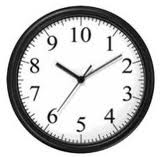 April 1, 1975:  an Australian TV show, This Day Tonight, announced the country would be converting to “metric time.”

A shot of Adelaide’s Town Hall with a new 10-hour metric clock face was shown.

The report included an interview with Deputy Premier Des Corcoran, who was on in the prank, praised the new time system.

Calls came into the TV station from viewers who fell for the hoax. One irate caller who had just purchased a new digital clock wanted to know whether it could be converted to metric time.

It’s in the Museum of Hoaxes: http://www.museumofhoaxes.com/hoax/af_database/permalink/metric_time/ 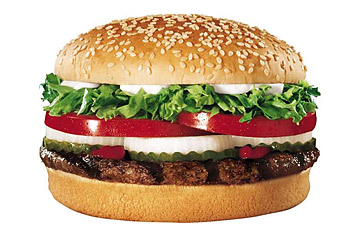 In a full-page ad in USA Today, Burger King announced a solution for the 1.4 million southpaws visiting their restaurants every day — a Left-Handed Whopper.

So they could “Have It Their Way,” the burger’s contents were rotated 180° for left-handed customers.

Left-handers tried to order the burger the next day. They had to wait in line behind right-handed customers, however, who wanted to be certain they were getting right-handed Whoppers.

Obviously it didn’t occur to any of these customers that a burger is a circle — in which components are equal all the way around.