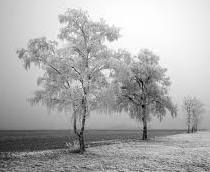 I have a new activity that can be practiced by dull men–watching frost thaw.

This morning I was at a golf course where a sharp freeze had covered the ground with frost. Because the dull men who run the course won’t let people play until the frost is gone — walking on the frost might kill the grass and that would be exciting — a bunch of dull men were standing around just staring at the first tee, watching the frost thaw.

As I see it, watching frost thaw is duller than

watching luggage carousels go round and round. After all, carousels move; frost doesn’t.

Incidentally, I was not one of the men out there watching frost thaw. I was in the coffee shop thinking dull thoughts.