French Presidential Election, after first round "Monsieur Ordinaire" (a nominee last year for our Dull Man of Year) remains front-runner 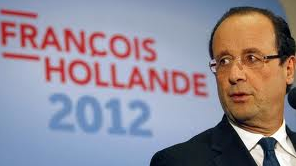 Franchois Hollande is emerging as the front-runner. He’s pulling ahead of incumbent president Nicolas Sarkozy. Running for president is a big turnaround for Hollande.

A year ago he was a nominee for our Dull Man of the Year.

For years, Hollande was referred to as Monsieur Ordinaire. And l’homme tranquillite,”The Quiet Man.” He was the Socialist Party’s eternal backroom boy, working in the shadows of the party’s stars, including his former wife, Segolene Royal.

He’d been out of the spotlight serving as office manager for numerous leaders, member of his town council, member of parliament, the party’s Secretary for Economic Issues, member of the French Audit Court.

He was nominated for our Dull Man of the Year for 2011.

Comparing Hollande to Sarkozy is like comparing jour et nuit, day and night. As the English say, chalk and cheese.

Hollande is self-deprecating, grounded, down-to-earth. Although he’s not much taller than Sarkozy, Hollande jokes about his height. He says, because of his low center of gravity, he doesn’t get knocked over.

Hollande emerged from obscurity after Dominique Strauss-Kahn’s problems with his zipper came to light. DSK was favored to win the party’s nomination for president. But his arrest in New York put an end to that.

As for Dull Man of the Year for 2011, Hollande lost to Michael Kennedy, a retiree on the Norfolk Coast of England. Kennedy spends two hours every day except Saturdays moving rocks to build a seawall that prevents erosion of the cliffs along the coast.