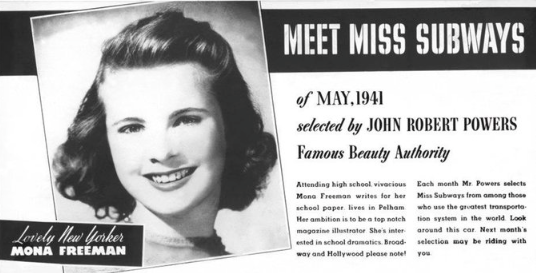 We wish it still existed. We’d much prefer hearing about a Miss Subways instead of glam titles like Miss World, Miss Universe, Miss America.

Mona was our kind of gal — had values dull men applaud. We see in the New York Times article that, when applying to attend a modeling agency school and asked to pay $300 ($5,000 in today’s dollars) tuition, she said, “Your school is Champagne, and I’m a gal hungry for bread and butter.” Tuition was waived.

We like to ride New York’s subways. In fact, to avoid all the excitement of New York, we prefer to tour New York staying on the subways trains all the time, only imagining what’s overhead.

When in New York, we dull men like to eat at the diners. We were pleased to read that the owner of Ellen’s Stardust Diner, Ellen Hart Sturn, was Miss Subways in 1959. The diner has photos of many of the Miss Subways on its walls — as well as food we like: Grilled American Cheese Sandwiches, Hot Dogs, Waffles, Ice Cream — at reasonable prices.

Here’s some information about the subways: