It’s rare that a dull man is bold enough to pull an April Fool’s Joke on someone. Except perhaps the one about Paint That Never Dries that he might try out on fellow dull men.

There are some great ones, however, that we can enjoy and laughing about: 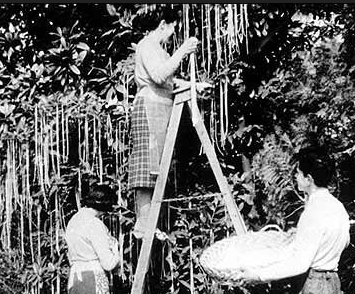 This was when Italian dishes were not widely available in the U.K. Some Brits did not know spaghetti is a pasta made from wheat flour and water.

You can watch this harvesting now on YouTube: https://www.youtube.com/watch?v=27ugSKW4-QQ

It’s in the Museum of Hoaxes: http://www.museumofhoaxes.com/hoax/archive/permalink/the_swiss_spaghetti_harvest

April 1, 1975:  an Australian TV show, This Day Tonight, announced the country would be converting to “metric time.”

A shot of Adelaide’s Town Hall with a new 10-hour metric clock face was shown.

The report included an interview with Deputy Premier Des Corcoran [who was on in the prank] praised the new time system.

Calls
came into the TV station from viewers who fell for the hoax. One irate
caller who had just purchased a new digital clock wanted to know
whether it could be converted to metric time.

It’s in the Museum of Hoaxes: http://www.museumofhoaxes.com/hoax/af_database/permalink/metric_time/

In a full-page ad in USA Today, Burger King announced a solution for the 1.4 million southpaws visiting their restaurants every day — a Left-Handed Whopper.

So they could “Have It Their Way,” the burger’s contents were rotated 180° for left-handed customers.

Left-handers tried to order the burger the next day. They had to wait in line behind right-handed customers, however, who wanted to be certain they were getting right-handed Whoppers.

Obviously it didn’t occur to any of these customers that a burger is a circle — in which components are equal all the way around.

It’s in the Museum of Hoaxes: http://www.museumofhoaxes.com/hoax/af_database/permalink/the_left-handed_whopper/