Christmas Crackers: squirreling away now for next year

Today, Boxing Day, we squirrel away our Christmas Crackers for another year, will bring them out again next December.

Before we close the box, do you have any you’d like to put in it? If so, please email to contactus@dullmensclub.com.

Christmas Quackers — two of the dumber ones this year:

Where to you go to weigh a whale?

To a whale weigh station

What’s brown and sticky?
A stick

From Steve Reszetniak, who says it’s one of his favorites 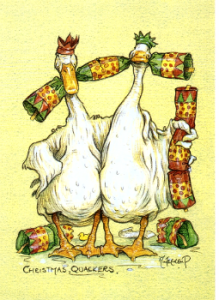 Steve Reszetniak then redeemed himself: 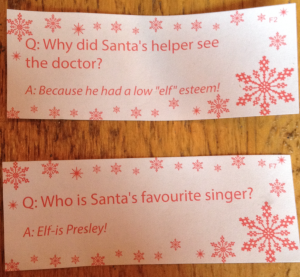 For readers not familiar with the British Christmas tradition of Christmas crackers, here’s some background.

The tube, when pulled on each end, it breaks open with a cracking – exploding – sound. A paper slip with a joke and a paper crown fall out.

Christmas crackers were invented by Thomas Smith in 1846 when he was visiting Paris. He came across a bon-bon, a sugar-almond wrapped in tissue paper. Smith began importing bon-bons to England.

The bob-bons sold well in England at Christmas but not other times of the year.

In the 1850s, Smith started putting mottos in the bob-bons. As bon-bons were often bought by men to give to women, many of the mottos were love poems.