Breaking News from Switzerland: to shake off “most boring” label resort resorts to stone-skimming 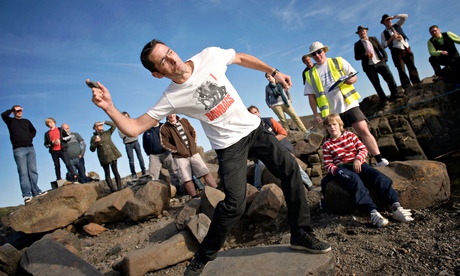 “Swiss resort sets up stone-skimming contest to shake off ‘most boring’ label: Village of Ermatingen establishes competition after residents take offence at being labelled Switzerland’s most dull resort” is the headline in The Guardian.

A local hotelier, Andy Hostettler, came up with the idea of hosting a stone-skimming championship after residents in his village tired of being billed as boring

“We had positioned our village as the most boring resort in Switzerland,” he said. The idea was that being in a boring place can be relaxing. But not everyone “got it.”

“Then we thought, well, what should we do for an event? And what does someone do when they are bored? They skim stones.”

Hostettler had planned on hosting what he thought would be the first stone-skimming world championships but then found out that a stone skimming championship already takes place every year on Easdale Island in Scotland, He obtained permission from the organizers of Easdale for the Ermatingen stone skimming qualifying rounds for Easdale.

The inaugural date for the event will be 16 August. We’re putting in on our calendar.