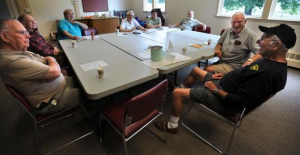 Interesting women need not apply to Southborough’s Dull Men’s Club. Formed in January, the group’s regular Friday meetings, which has about fifteen local members, start off with a sharing of often bawdy jokes and funny sayings; for example “The definition of ambivalence is watching your mother-in-law going over a cliff in your brand new Mercedes”.

Eddie Blood of Southborough, left, and club chairman
Bill Harrington of Northborough laugh along with the jokes.

They then let the conversation take them to whatever mundane topics men talk about when they gather, such as hobbies (archery or bonsai trees) or the difference between oil and latex paint.

They also take a break for the 50/50 raffle with half the money going to the Southborough Food Pantry.

While women are not allowed because they, according to the international chapter’s website, can not be dull, there has been talk amongst the women about starting their own club at the center.