Four more British sports should be in Olympics

We are watching the excitement of the Olympics and looking at the list of events.

We wonder why some wonderful long-standing English events are not on the list. After all, as was recognized years ago in the Official Report for the 1908 London Olympic Games [click here], “England is the cradle of so many forms of athletic sport.”

We hope they try again for the 2016 Olympics, which will take place in Rio de Janeiro.

In the application for Olympic status, since the shot put is an Olympic sport, naming it the the “pudd put” might help it qualify.

Black Pudding Throwing stems from the ancient rivalry between Lancashire and Yorkshire during the War of Roses, a war fought spasmodically 1455-1485. Two rival branches of the Royal House of Plantagenet, the House of Lancaster and the House of York, were fighting each other. The troops ran out of  traditional military ammunition. So they threw food.

The present championships take place at The Royal Oak pub, which is in Ramsbottom, near Manchester. They take place on the second Sunday of September every year. Contestants come from England, Scotland, Wales, South Africa, Australia and many other countries.

If air rifle shooting and the biathlon are Olympic sports why not pea shooting?

Peashooting began in 1971 in the Cambridgeshire village of Witcham. Competitions have been held every year since then. This year the 42nd Annual World Peashoting Competition was held on July 14. It was on our Calendar, click here.

It all began when the village schoolmaster, John I. Tyson, caught mischievous pupils amusing themselves by pinging their unfortunate schoolmates with peas. He confiscated the offending weapons.

Around the same time the village had identified a need for a village hall and they were seeking ways to raise funds, John suggested a World Peashooting Championship.  The idea was an instant success and is central to each year’s fund-raising activities to this day.

Although innovations like laser sights and telescopic sights are being used by some shooters now, traditionalists are holding their own.  The innovations have, however, been a source of keen interest from the media and raised the national profile of the event.

Participants and spectators come from, the U.S., Scandinavia, France, Spain, New Zealand, Holland and many other countries. 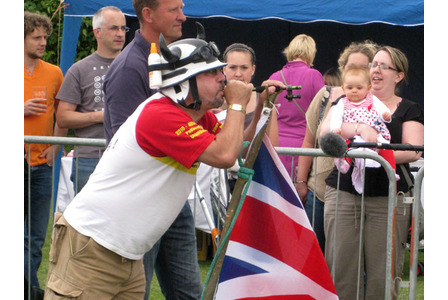 Cheese rolling is an annual event in Stilton, a village in Cambridgeshire. Hundreds of villagers and visitors line the racecourse that begins at The Bell Inn and ends at the bottom of Fen Street and Church Street. Contestants group together in teams of four.

Click here to read about it on our Calendar page.

An eight pound large round Gloucester cheese is set rolling down Cooper’s Hill, a steep hill in Gloustershire. Participants chase the cheese down the steep slope. There’s ittle hope they’ll catch up with the cheese. There’s lots of sprawling, rolling, tumbling.

The first to the bottom wins the cheese.

Medics are on hand to carry injured participants off the hill, usually on stretchers. Safety nets are on each side of the course to protect spectators.

Many of our members like to queue, especially the British members. It might well be the main reason they will be attending the Olympics.
For their queuing skills, shouldn’t they be awarded Olympic medals?
Click here to read our blog post about queuing and the 2012 London Olympics.