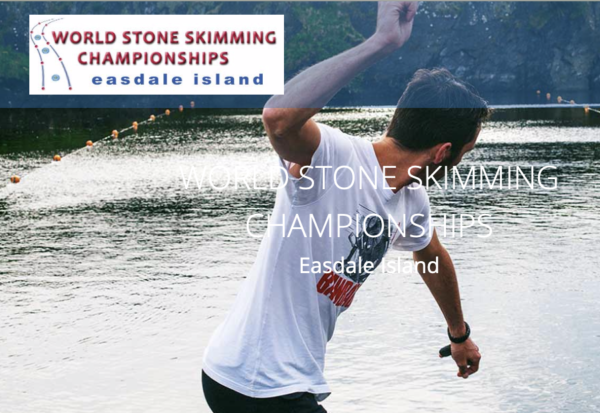 The championships are held every year — last Sunday of September.

Anyone of any age and any level of skill can enter. The number of entrants is capped at 350. (The limit is based on the organizers’ calculation of time needed for each entrant to have their throw and for the awards ceremony as well as the time the last ferry leaves the island.)

Easdale Island is the smallest permanently inhabited island of the Inner Hebrides. It was once the center of a thriving Scottish slate mining industry. A disused quarry is a perfect arena for the World Stone Skimming Championships.

Contestants come from around the world — over 200 participants and many spectators.

Registration starts at 11:00 a.m. at Easdale Island Community Hall. If you would like to compete just turn up as there are no qualifying rounds.

Competition starts at 12:00 noon. It is suggested that competitors get down to the quarry side early to avoid queues.

Each competitor is allowed three skims using specially selected Easdale slate skimming stones. For a skim to qualify the stone must bounce at least three times. The skim is judged on the distance achieved before the stone sinks.

This category is for those entrants who have reached the experienced and veteran heights of no longer being in their 50s. Entrants in this section will throw at the same time as the other adults in the order in which they register. Be sure and mark your registration form if you wish to enter this category.

Saturday night, the night before the event, there will be a Pre-Skim Party, in Easdale Island Community Hall. Live music by Sheelnanagig from Bristol.