Cheese rolling is an annual event in Stilton, a village in Cambridgeshire, England. Hundreds of villagers and visitors line the racecourse that begins at The Bell Inn and ends at the bottom of Fen Street and Church Street. Contestants group together in teams of four.

Click here to view the Stilton Village website, which has many pictures of cheese rolling over the years. 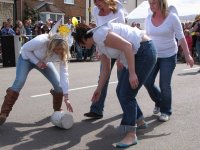 Fancy some Stilton now? . . . you can order from Tesco: 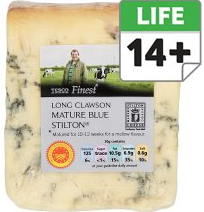 Unlike the Stilton Cheese Roll, where cheese is rolled down a relatively flat road, the Gloucester Cheese Roll on a steep hill.

Each year there a many injuries. This is Extreme Cheese Rolling. It is not an event for dull men.

The event had been held in May each year on Cooper’s Hill in Gloucestershire. Up until 2010. The 2010 event was cancelled (click here) due to the inability to arrange sufficient insurance coverage.