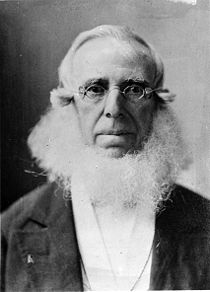 In 1845, industrialist, inventor, and philanthropist Peter Cooper, of Tom Thumb engine and Cooper Union fame, obtained the first patent for a gelatin dessert. The dessert led to Jello-O.

In 1895, Pearl B. Wait, a cough syrup manufacturer from Le Roy, New York who dealt in patent medicines, bought the dessert’s patent from Peter Cooper and turned it into a prepackaged commercial product. His wife, May David Wait, renamed the dessert “Jell-O.” However, they were also unsuccessful in selling the product.

Frank Woodward, a school dropout and, who by the age of 20 had his own business, bought the rights to Jell-O for $450. Among the products Woodward marketed were several patent medicines, Raccoon Corn Plasters, and a roasted coffee substitute called Grain-O. Sales were still slow, so Woodward offered to sell the rights to Jell-O® to his plant superintendent for $35. However, before the final sale, intensive advertising paid off. By 1906, sales reached $1 million. By sending out nattily dressed salesmen to demonstrate Jell-O and distributing 15 million copies of a Jell-O recipe book containing celebrity favorites, popularity rose. Woodward’s Genesee Pure Food Company was renamed Jell-O Company in 1923, and later merged with Postum Cereal to become the General Foods Corporation.