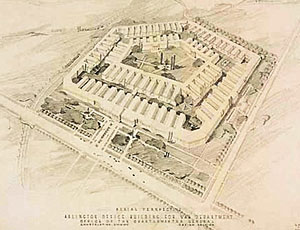 Construction of the Pentagon in Arlington, Virginia was completed o January 15, 1943. Many dull men work there.

Click here to read the facinating history of the Pentagon.

Pentagon, large five-sided building in Arlington county, Virginia, nearWashington, D.C., that serves as the headquarters of the U.S. Department of Defense, including all three military services—Army, Navy, and Air Force.

Constructed during 1941–43, the Pentagon was intended to consolidate the offices of the War Department, which had occupied 17 separate facilities throughout Washington. Although President Franklin D. Roosevelt initially favoured a building without windows to protect it from potential air raids, he was later convinced by building engineers that such a facility would be impractical. He eventually supported a five-sided design by George Edwin Bergstrom—though Gilmore Clarke, the chairman of the Commission of Fine Arts, whose office was charged with advising the president and Congress on federally funded artistic and public structures, criticized it as “one of the most serious and worst attacks on the plan of Washington.” The site selected was mostly a swampy wasteland whose only structure was the small, obsolete Washington Airport. In order to stabilize the area, some 5.5 million cubic yards (4.2 million cubic metres) of dirt were trucked in, and 41,492 concrete piles were set to support the building’s foundation. To protect the vista of neighbouring Arlington National Cemetery, the Pentagon’s height was strictly limited to 77 feet 3.5 inches (24 metres). With the country’s entry into World War II in December 1941, just three months after the start of construction in September, completion of the building became a national priority. More than 13,000 workers laboured day and night, and within just eight months of groundbreaking, Secretary of War Henry Stimson relocated his offices to the new facility.