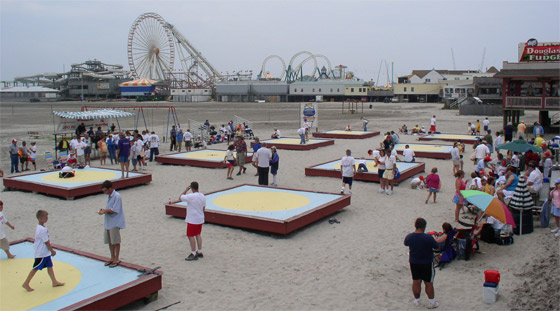 The marbles tournament will be held this year for four days, June 20-23. “Mibsters”(marble shooters) compete for national honors, college scholarships, and other prizes and awards. They will play 1,200 or more games over the four-day tournament.

Champions from local tournaments all across America converge on Wildwood for the competitions as well as enjoying amusement rides and boardwalk attractions.

The game played at the tournament is called “The Ringer.” Thirteen marbles are placed to form an “X” in a circle that is ten feet wide. The player that shoots seven marbles out of the ring wins.

The National Marbles Tournament was first held in 1922. The committee that operates the tournament is made up of volunteers who share an interest in marbles.

There is a long list of rules — The Offiical Rules of the Marbles Tournament — perfect reading material for  dull men. 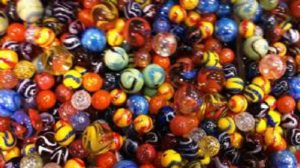 Lost your marbles? If so, you can replace them at this event