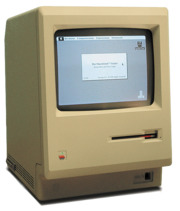 The orignal Macintosh, or “Mac,” was introduced on January 24, 1984. It was the first commercially successful personal computer to use a mouse and to use images on its screen, instead of text, to interface with the user. Click here to read more on Wikipedia.

Click here to read about a presenation by Steve Jobs four years ago — celebrating the 25th anniversary of the Mac.