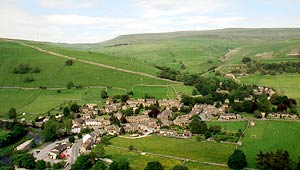 Scarecrows, over 100 of them, first appeared in Kettlewell in 1994 in connection with a fund raising event for the local school. The scarecrows received an enthusiastic response, which has continued. The event became an annual event. It has grown year by year. It attracts thousand of visits over its nine-day run.

Walking along the Scarecrow Trail is good way to see all of Kettlewell as well as trying to find all of the scarecrows along the way.

There is ample car parking in Kettlewell.