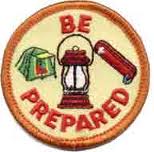 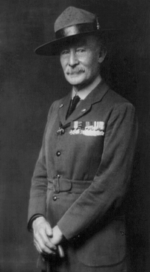 Baden-Powell was born as Robert Stephenson Smyth Powell, or more familiarly as Stephe Powell, at 6 Stanhope Street (now 11 Stanhope Terrace), Paddington in London, on 22 February 1857.He was named after his godfather, Robert Stephenson, the railway and civil engineer, his third name was his mother’s maiden name. His father Reverend Baden Powell, a Savilian Professor of Geometry at Oxford University, already had four teenage children from the second of his two previous marriages. On 10 March 1846 at St Luke’s Church, Chelsea, Reverend Powell married Henrietta Grace Smyth (3 September 1824 – 13 October 1914), eldest daughter of Admiral William Henry Smyth and 28 years his junior. Quickly they had Warington (early 1847), George (late 1847), Augustus (1849) and Francis (1850). After three further children who died when very young, they had Stephe, Agnes (1858) and Baden (1860). The three youngest children and the often ill Augustus were close friends. Reverend Powell died when Stephe was three, and as tribute to his father and to set her own children apart from their half-siblings and cousins, the mother changed the family name to Baden-Powell. Subsequently, Stephe was raised by his mother, a strong woman who was determined that her children would succeed. Baden-Powell would say of her in 1933 “The whole secret of my getting on, lay with my mother.” After attending Rose Hill School, Tunbridge Wells, during which his favourite brother Augustus died, Stephe Baden-Powell was awarded a scholarship to Charterhouse, a prestigious public school. His first introduction to Scouting skills was through stalking and cooking game while avoiding teachers in the nearby woods, which were strictly out-of-bounds. He also played the piano and violin, was an ambidextrous artist, and enjoyed acting. Holidays were spent on yachting or canoeing expeditions with his brothers.