•  Sponsored by the Society of Ploughmen.

•  Fierce competition — not only for the British National Titles — but also for the supreme honour of representing Britain at the 2013 World Ploughing Championships, the “Grand Prix” of ploughing.

•  Horses, two dozen pairs of them, are the biggest crown pleaser — taking spectators back to when farming was a gentler, quieter way of life. 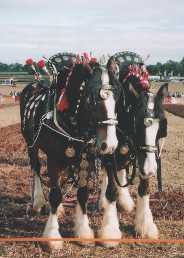 Ploughing Academy: the Society of Ploughmen sponsor the Ploughing Academy. Two days of ploughing courses for for reversible and conventional ploughing and for ploughmen and women of all ages. Instructors are Champion Ploughmen. Click here.