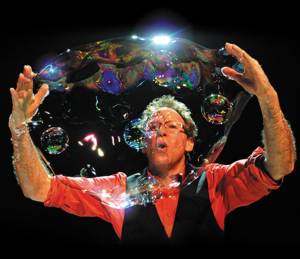 Most bubbles lead boring lives. But not bubbles in Louis Pearl’s “Amazing Bubble Show.” It’s where bubbles show their stuff.

Louis is a performance artist, often performing for children. Instead of trying to dazzle them with daring antics like a lion tamer, trapeze artist, or sword swallower, he entertains using something very ordinary — bubbles.

Unlike the typical highly-energized, overly-happy performer for children, Louis is low-key, rather shy. He doesn’t try to pump up the kids. He lets the bubbles speak for themselves. He’s been described both as a scientist who creates performance art and as a performance artist who creates science. He calls himself a ‘bubble-ologist’

When growing up, in San Francisco, he thought he might become a surgeon like his father. He changed his mind when he watched an autopsy. He was 16 then. But he never lost his interest in science, As a bubble-ologist, he applies a surgeon’s precision when working with water, soap, beakers, and scales to create bubbles that entertain.

It started during his university days. He made toys to pay the bills. One toy was the “Bubble Trumpet.” It made bubbles. His demonstrations of it caught the attention of a summer camp for children that invited him to teach kids at the camp about bubbles. This grew to doing stage shows with bubbles. “The Amazing Bubble Man” show was born.

“Children love bubbles,” Louis says. “Bubbles are magical. Children chase them around the room. And then destroy them. There are not many things kids are allowed to destroy. Adults love the shows as well, including royalty and celebrities. Bubbles are like dreams, so very real when they are happening, then they pop and leave only a slight memory.”

Louis has performed now for 33 years — to over one million people all around the world, including extensive tours every year in both the United States and the United Kingdom (nine sell-out years at the Edinburgh Fringe) and in Canada, New Zealand, Hong Kong, Japan, Netherlands, France, Switzerland, Romania, and Dubai. 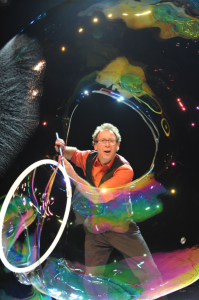 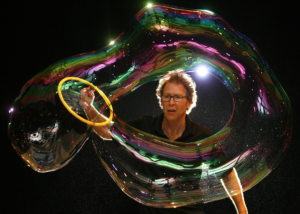