Dozens of gravediggers worked to bury their competition yesterday at a national contest in Debrecen, Hungary, plot 37A. The winning team goes to a tournament coming up in November at Trencin, Slovakia against Poland, Slovakia, and the Czech Republic.

Eighteen two-men teams used shovels, rakes and axes to dig their way six feet under in the public cemetery. The graves were judged on neatness and compliance with regulation size: 200 cm long, 80 cm wide and 160 cm deep (7 feet by 2 feet 7 inches by 5 feet).

The local team, perhaps enjoying home advantage, finished first. They finished in less than a half hour. Stragglers took almost an hour. 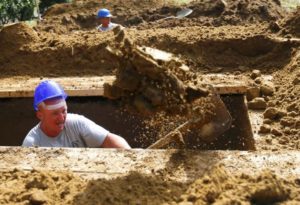 A gravedigger takes part in the first Hungarian grave digging championship in Debrecen, Hungary, June 3, 2016, competing for the national crown, which is awarded based on accuracy, speed, and aesthetic quality. REUTERS/Laszlo Balogh