Legend tells it the event originated during the War of Roses, a war fought spasmodically 1455-1485. Two rival branches of the Royal House of Plantagenet, the House of Lancaster and the House of York, were fighting each other. The troops ran out of  traditional military ammunition. So they threw food.

These days contestants come from England, Scotland, Wales, South Africa, Australia and many other countries. 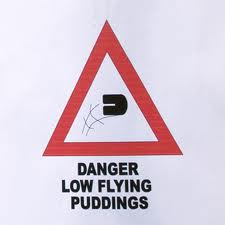