The FIRA RoboWorld Cup (founded in 1996) will be co-hosted by the National University of Malaysia, Department of Polytechnic Education (Ministry of Higher Education) and MySET (Malaysian Society for Engineering and Technology) from 24th until 29th August 2013.

The FIRA RoboWorld Cup will be held together with FIRA RoboWorld Congress  (a scientific robotics conference). In the past, these happening events have been hosted in the United Kingdom, India, Korea, China, USA, Germany, Singapore, Australia, France and Brazil.

The FIRA-RoboWorld Cup has resulted in introducing new holistic technology to the world that involves mechanical, electronics and digital control and image processing technology. The upcoming event will continue this spirit by adopting the theme “Intelligent robotics systems: Inspiring the NEXT”. 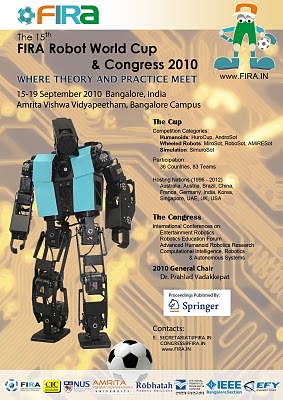