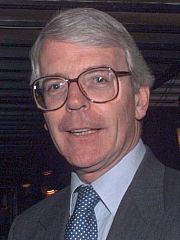 John Major, at one time an honorary member of the DMC, turns 69.

Sir John lost his memership back in 2002 due to overindulgence in curry. 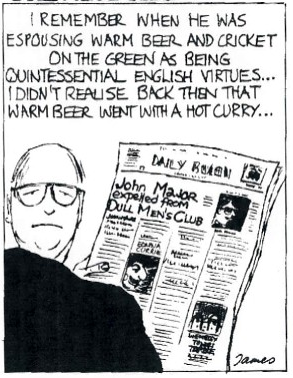 Lord Cranbury, London spokesman for the DMC, announced Sunday, 29 September, the expulsion of John Major from the Dull Men’s Club. This happened at an extraordinary meeting Sunday of the assistant vice presidents of the DMC (AVP is the DMC’s highest office). The meeting was called shortly after news broke about John Major’s affair with Edwina Currie. It was unanimously voted that John Major should be expelled. Major had been made an honorary member four years ago.

The DMC had received many emails nominating him for membership. A typical comment was, “There’s no one more suited for membership; and not only gray suits, also gray hair, gray personality.” Moreover, he scored 100% based on the membership questionnaire.

But times have changed. Lord Cranbury summed it up Sunday when he said, “Remember when John Major was espousing warm beer and cricket on the green as being quintessential English virtues? We didn’t realize at the time that his warm beer went so well with a hot currie.”