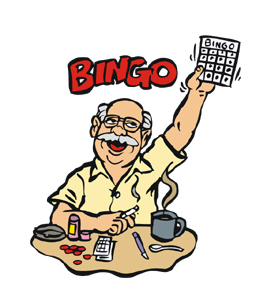 In the U.S., bingo was originally called “beano”. It was a country fair game where a dealer would select numbered discs from a cigar box and players would mark their cards with beans. They yelled “beano” if they won.

The game’s history can be traced back to 1530, to an Italian lottery called “Lo Giuoco del Lotto D’Italia,” which is still played every Saturday in Italy. From Italy the game was introduced to France in the late 1770s, where it was called “Le Lotto”, a game played among wealthy Frenchmen. The Germans also played a version of the game in the 1800s, but they used it as a child’s game to help students learn math, spelling and history.

When the game reached North America in 1929, it became known as “beano”. It was first played at a carnival near Atlanta, Georgia. New York toy salesman Edwin S. Lowe renamed it “bingo” after he overheard someone accidentally yell “bingo” instead of “beano”. He hired a Columbia University math professor, Carl Leffler, to help him increase the number of combinations in bingo cards. By 1930, Leffler had invented 6,000 different bingo cards. [It is said that Leffler then went insane.]

A Catholic priest from Pennsylvania approached Lowe about using bingo as a means of raising church funds. When bingo started being played in churches it became increasingly popular. By 1934, an estimated 10,000 bingo games were played weekly, and today more than $90 million dollars are spent on bingo each week in North America alone.

Why BINGO is good for us?