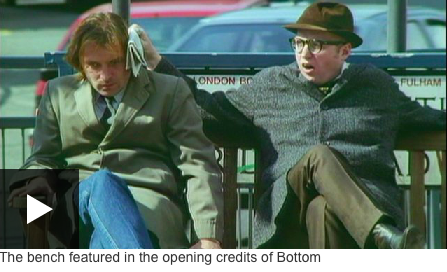 Reported on BBC News — “Rik Mayall ‘Bottom’ bench to be unveiled in Hammersmith.”

The bench, which matches the bench that featured in the opening credits of BBC sitcom “Bottom,” will be unveiled — with the inscription “In Memory of The Man, The Myth, The Legend.”

This is the result of an online campaign by fans after the death of Rik Mayall. 7,000 fan signed petitions to have the bench returned.

Mayall said shortly before he died in June that he was sad to see the bench had been removed from it’s location in Hammersmith.

We’ve posted this news on our Park Bench Appreciation Society on Facebook.