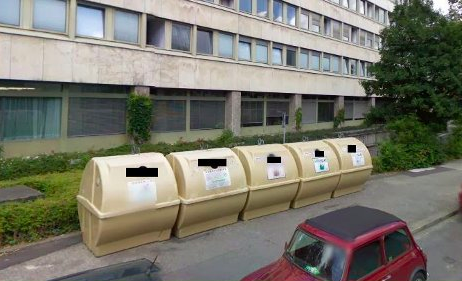 Award-winning bins on Seitzstrasse in Munich

The five bins have earned a rating of 4.7 out of a possible 5.0 on Google maps. That’s the same rating as the famous BMW Museum.

They are ahead of the Allianz football stadium, which was rates 4.5, and House of Art, which rates 4.4.

A tourism commentator says, “I read about this oasis of recycling in a guide book. If you’re ever in Munich you definitely have to make a trip there.”

It’s amazing that the bins are attracting so much attention in one of Europe’s major cities, home to ancient cathedrals, beer halls, and one of the world’s most famous soccer teams. A city that Strauss, Wagner, and many Nobel Prize winners came from.

Thanks to Steve Resnitniak for sending this to us. Steve says, “if anyone thinks that the only dull men in Germany are the inhabitants of Dülmen, they can think again. The fine people of München (or Munich, if you like) could teach us all a thing or two about recycling.

And apparently Munichers can teach us all a thing or two about attracting tourists.